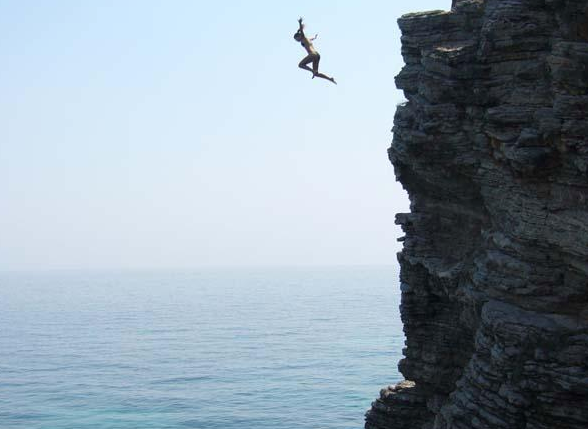 Some time ago I wrote a couple of blog posts on Hope.  One reader’s response was a request that I write about Courage some time.  So here we are, at last.  Part One is about my changing reflections as to what courage is.  Part Two is one small personal act of “ordinary courage”.

For a long time I had mixed feelings about “courage” as a concept, torn between seeing it as other people’s super-human acts of bravery, on the one hand; and on the other, knowing that opportunities for demonstrating courage presented themselves every day, in those simple – yet difficult – invitations to take a bigger step in, out or up into something that suddenly became meaningful or important.

In my former organisation, I facilitated a women’s leadership development programme where our company’s values – of which Courage was one – were explored in depth, and personalised for our professional and personal circumstances.  Through this work I learned – or relearned – that the word “Courage” comes from the Latin “Cor”, meaning heart.  “Coeur” in French.  (Sometimes the obvious can pass me by!)  The work allowed us to reflect on where the need for increased courage showed up day-to-day, in conversations, at work, at home, and how courage compared with risk-taking (this was during 2009 and 2010, shortly after the financial crisis of 2008). 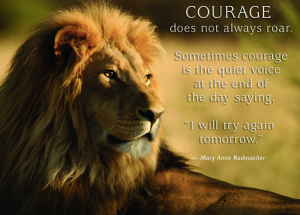 Osho, a spiritual teacher from India, writes, “The word courage comes from a Latin root cor, which means ‘heart’.  To be courageous means to live with the heart.  And weaklings, only weaklings, live with the head; afraid, they create a security of logic around themselves.  Fearful, they close every window and door – with theology, concepts, words, theories – and inside those closed doors and windows, they hide.  The way of the heart is the way of courage.  It is to live in insecurity; it is to live in love, and trust; it is to move in the unknown.  It is leaving the past and allowing the future to be.  Courage is to move on dangerous paths.  Life is dangerous, and only cowards can avoid the danger – but then, they are already dead.  A person who is alive, really alive, vitally alive, will always move into the unknown.  There is danger there, but he will take the risk.  The heart is always ready to take the risk, the heart is a gambler.  The head is a businessman.  The head always calculates – it is cunning.  The heart is non-calculating.” (From “The Joy of Living Dangerously”, Osho, 1999).

Closer to the business realm, Dr. Brené Brown, whose talks on Vulnerability and Shame are among the most viewed on the TED website, writes in one of her books that “Courage is a heart word.  The root of the word courage is cor – the Latin word for heart.  In one of its earliest forms, the word courage meant “To speak one’s mind by telling all one’s heart.” Over time, this definition has changed, and today, we typically associate courage with heroic and brave deeds.  But in my opinion, this definition fails to recognize the inner strength and level of commitment required for us to actually speak honestly and openly about who we are and about our experiences — good and bad.  Speaking from our hearts is what I think of as “ordinary courage.”  (From “I thought it was just me (but it isn’t)”, Brené Brown, 2007).

This summarises well my own evolving feelings about courage.  Yes – there have been times in my life when I have shown the bravery (or daft?) type of courage – I have jumped out of an aeroplane (with a parachute); I have bungee-jumped off the (then) highest bungee jump bridge in the world, in Skipper’s Canyon, New Zealand; I have travelled alone for extended periods of time; and I have moved countries and continents with and without partner and kids in tow.  And I have done a lot of strenuous long-distance running, skiing and swimming events. People who have climbed the highest peaks on all continents might not think that my acts show up on their Courage Richter Scale, but for me it’s the same category of courage – physical strength, endurance, going against the laws of protecting one’s body from damage or physical harm, and overcoming the fear of dying.  But that’s just one form of courage.

What about the “daily acts of ordinary courage”, as differentiated by Brené Brown?  Confessing our fears, emotions and vulnerabilities.   Sitting with someone who’s going through hell, and knowing there’s nothing you can do to help.  Calling someone up – when it would be easier to send an sms, or do nothing at all – when they are about to go into hospital for a battery of tests with unknown consequences.  Calling someone up whose loved one has recently died.  Advising a formerly-valued team member to leave the organisation because the fit is no longer there.  Suggesting that it’s the client’s boss, not the coaching client, who needs a coach.  Telling your organisation that redundancies and restructuring are inevitable.  Taking a hard look at your life and how you’re spending time, knowing that you may not like what you see.  We have these opportunities for courage day in, day out.  These are examples of living from the heart, with the heart.  This is courageous living and leading.  When we speak truthfully, there is no shame.  There might be fear and vulnerability, but overcoming them and speaking our heart’s story is exactly where the courageous deed lies. 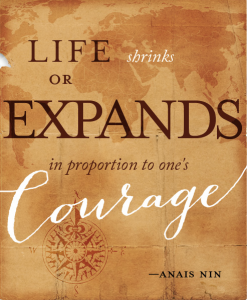