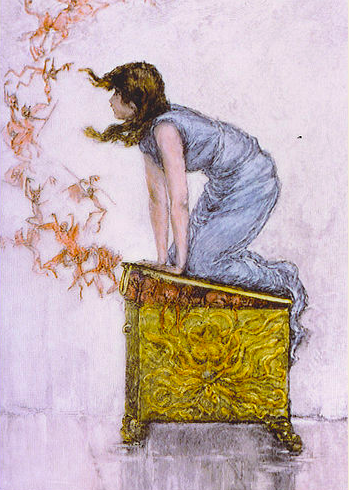 The second story that came to my mind about hope is that of “Pandora’s Box”. One of my children has recently been reading about some of the Greek Myths and Legends for school, and since I wasn’t entirely sure I knew the story of Pandora’s Box anyway, I did some research. Based on a range of sources, the story goes:

Zeus, who had become the king of the gods sitting on Mount Olympus, had hidden fire from human beings, believing them not to be worthy. Prometheus stole fire back from the gods, concealing it in a stalk of fennel, and gave it back to the humans. He also taught humans all the civilising arts, such as writing, mathematics, agriculture, medicine and science.

In revenge for the theft of the fire, Zeus played a cruel trick on humans. He ordered the gods to create a beautiful woman in the image of a goddess. Hephaestus, the smith god, made her from Earth mixed with water; Athena, goddess of wisdom, taught her crafts and weaving; Aphrodite, goddess of love, gave her irresistible charm; Hermes, god of imagination, gave her a deceitful nature, and called her “Pandora” (‘pan’ meaning ‘all’ and ‘dora’ meaning ‘gifts’).

Prometheus, seeing ahead into the nature of things, warned his brother not to accept any gift from Zeus, who was reversing the order of life. But when Zeus tempted Epimetheus wih Pandora – the first woman – he forgot his brother’s warning, and took the gift from Zeus with great delight. She looked so promising: she was clothed in a silver robe and an embroidered veil; she wore on her head a crown of gold garlanded with flowers and new grown herbs and patterned with the many creatures of land and sea. Gods and mortals were seized with wonder. How could mere humans withstand such temptation?

Pandora and Epimetheus were given an urn as a wedding gift, which they were forbidden to open, for the sake of the whole world. It contained powers beyond human capacity to understand and control. These were all the gifts of life and death, which Gaia alone could give. But the temptation was too great for Pandora, who, not knowing what she was doing, opened it.

Out came all the troubles known to mortals: sicknesses, war, famine, old age, harsh toil and death. Only Hope did not fly out, and remained in the jar, as Pandora quickly put the lid back on, seeing all the ills escaping from the urn. From then on, people on Earth, who had been living in peace, began to suffer fully from all the ills that plague us today.

Inevitably with myths and legends, there are many versions of every story. Since I was helping my daughter research an age-appropriate version of the legend, I found ones with happier endings. In these, when Hope has been trapped back inside the jar, Hope convinces Pandora to open it again, and so is let out. Hope then becomes the special ingredient – the salve – that makes our lives on earth tolerable.

Napoleon Bonaparte said, “A leader is a dealer in hope”. Barbara Fredrickson, a researcher in positive psychology, says, “Hope comes into play when our circumstances are dire, when things are not going well, or at least there’s considerable uncertainty about how things will turn out. Hope literally opens us up, removes the blinders of fear and despair, and allows us to see the big picture, thus allowing us to become creative and have belief in a better future”.

I believe hope to be a powerful energy, a motivating force, that helps us mere mortals to keep going to attain something that is important to us. Hope is a feeling, an expectation, a desire for something that we want to happen. We need hope to bounce back when we have failed. Hope not only keeps our spirits up – it enables us to access our creativity and find new solutions. 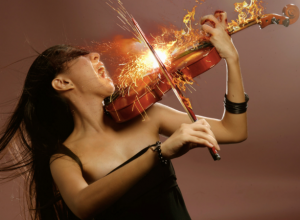